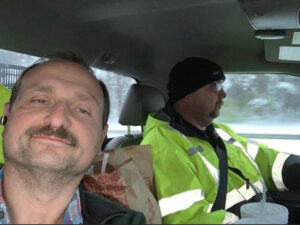 Riley Sparks (left) and Terry Cronk (right) carefully navigate the challenging road conditions to bring food and drinks to UCHRA Public Transportation passengers stuck in traffic on I-40 during the Jan. 6 snowstorm.

As the snow began to fall across much of the Upper Cumberland on Thursday, Jan. 6, UCHRA’s Public Transportation team wasn’t entirely aware of just how rapidly the regional travel conditions would deteriorate.

The Transportation team had a full day of trips scheduled including a busload of passengers leaving Cookeville for Nashville at 6 a.m. At that hour, the snow hadn’t arrived and all of the Nashville-bound passengers made it to their appointments safely. But then the snow began to fall and fast. Members of the UCHRA Public Transportation team at the Cookeville Transit Hub began calling all drivers back to the office and canceling any trips scheduled later in the day. Those clients who had already arrived at their appointments in Nashville were called and advised that the bus was returning to the Cookeville hub.

“Despite our best efforts to safely get back to Cookeville before road conditions worsened, one of the buses got stuck on I-40, just past the Lebanon exit,” said Riley Sparks, Fleet Operations Manager

While the bus was not involved in an accident, it was significantly delayed due to other accidents that had happened previously. The bus sat on the interstate for the majority of the day. Once the roads cleared enough, Sparks along with mechanic Terry Cronk met the bus along the route, bringing enough food and drinks for everyone on board and then following the bus back to Cookeville as a precaution. At approximately 6:30 p.m., the bus, its passengers, along with Sparks and Cronk, were back in Cookeville; the last passenger arrived home around 8 p.m.

Meanwhile, in Jackson County, Brandi Adcock, Jackson County Coordinator, and Belinda Frizzell worked to revise trip schedules while also packing up their equipment to transition to work-from-home procedures. Adcock called off all transportation for Jackson County on Friday, Jan. 7, due to the treacherous conditions. 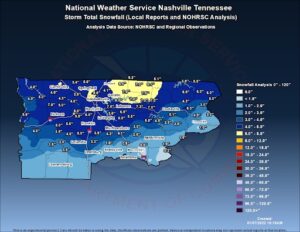 In White County, County Coordinator Sheila Robinson and her team, including Lashay Dobson and Jean Long,  worked to cancel pending trips scheduled for Friday, Jan. 7, and arrange for prompt pick-up of those individuals who had already been dropped off before the snow began to fall. Several drivers worked throughout the day Friday and Saturday to ensure clients made it safely to life-saving medical appointments.

The Upper Cumberland region saw snowfall amounts ranging from an inch to approximately eight inches of snow according to the Nashville office of the National Weather Service accumulation report shared on Jan. 7.

“Transportation staff in both the county offices and the central office worked tirelessly; calling clients to verify appointments, contacting drivers about their schedules, constantly monitoring the road conditions, and working throughout the weekend to ensure operations would run smoothly Monday,” said Holly Montooth, Transportation Director.

About the Author: Anderson